The regular pulse of Tres Aguas evokes the mind-body symbiosis of every living organism as well as the reciprocity that needs to exist between nature and society, individual and community. The Toledo works awaken a city’s inhabitants to the natural forces circulating under our feet and sustaining our existence

The springs beneath, the flow above, the light within

The town hall square is one of Toledo’s main public spaces, a meeting place for citizens and a destination for visitors the city. The square is flanked by the huge Gothic cathedral built between the thirteenth and fifteenth centuries on the site of the Moorish Great Mosque, the Archbishops palace and the Ayuntamiento, the Town Hall.

In the lower part of the square in front of the town hall, Iglesias made a dramatic cut into the surface of the square. It seems as if an ancient aquifer or subterranean channel has been uncovered beneath the stones. Water courses over the cast metal forms of a huge bas-relief, some twenty-five meters in length, and then gradually ebbs away. When full and still, the basin becomes a mirror which reflects and destabilises the normally imposing architecture.

The cycle of water runs for around 30 minutes. 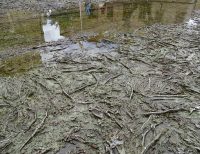 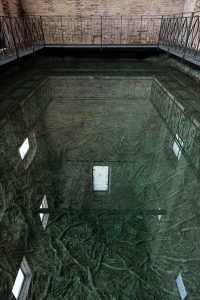 The Convent of Saint Clara is one of the historic convents in one of the quieter parts of the city, far removed from the noise and bustle of visitors. The convent was until recently home to a closed order, the Clarissimas (Holy Clares). The nuns agreed that a small part of the convent, accessible through its own door from the street, could become a place for Iglesias’s work. Beyond a configuration of screens which enclose the space and accentuate the feeling of interiority, a rectangular basin has been cut into the floor; a deep pool with glistening metal surfaces is revealed.

The movement of the water is calm and it draws the viewer deep inside. If the town hall square offers a place for more animated exchange, Iglesias’s work within the convent is a site for private reflection, a conversation with oneself.

The cycle of water in the convent runs for around 15 minutes.

There is a precise blurring of limits in Tres Aguas. Space and time are loosened to create a new form of perception. In a time of continuous bombardment of information, Iglesias makes us take a walk. Walking and thinking are inseparable. Motion becomes intellection. The water recedes and we are absorbed by the wrinkled wet surfaces, again and again

The Slow Art of Acupuncture